There has been a lot of talk this week about which era of wrestling is better?  The attitude era or the current era.  Attitude era, which included The Monday Night Wars, DX, The Rock, Stone Cold, sex and violence!  And the current era, which includes uber athletic wrestlers, great female wrestling, cutting edge production and billion dollar tv deals.

Lets start by talking about the attitude era.  To be honest, I don’t think we have the attitude era without the Monday Night Wars.  Prior to 1997 WWE which was WWF at the time was a very family friendly product.  With cartoon like characters and a product that was still living off the glory days of the 80’s.  By the mid 1990’s WWF was nowhere near the popularity it had ten years prior.  In 1996, WCW started Monday Night Nitro and the N.W.O. which took the wrestling world by storm.  Nobody was watching the WWF, and Vince McMahon took notice.

He made an announcement that explained how the WWF was headed in a new direction.  A direction with more attitude!  And shortly after the announcement, we started seeing the transformation of characters and WWF programming.  Guys like Bob “Sparkplug” Holly were now being called “Hardcore” Holly.  Rocky Miavia, was now The Rock!  The Roadie Jesse James went from being a roadie for Jeff Jarrett who was a country music singing character to Road Dogg  who went on to be apart of one the best tag teams of all time the New Age Outlaws.  Jeff Jarrett dropped the singing act and started using the guitar as a weapon and wearing shirts that said “Don’t Piss Me Off!”  Even Road Dogg’s partner Billy Gunn went from a cowboy gimmick to the Badd Ass.  You started to see the transformation of the product and it was going in a direction that was competitive with WCW’s Nitro.  From late 1997 to the end early 2002 we had an era of wrestling that was in my opinion, the best ever.  So, yes I would say the attitude era was much better than the current product.

I will admit that the WWF from ’97 to ’02 catered to my age range.  I was 15 to 20 during those years, and what late teenage boy isn’t interested in the violence, women in very little clothing, the beer drinking, cussing and how cool the characters were.  Guys like Stone Cold Steve Austin and The Rock. 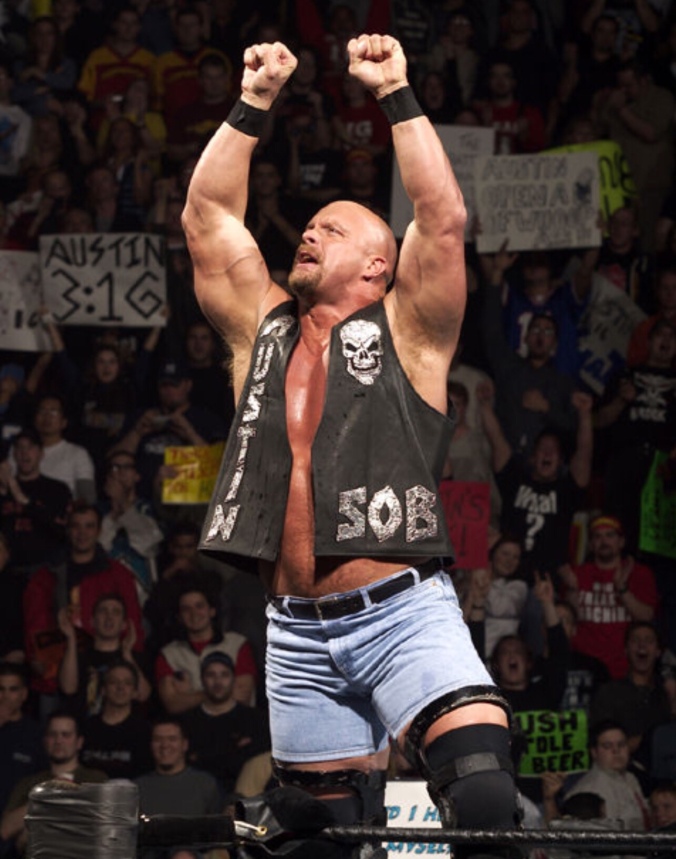 I was such a big fan of The Rock, that I started acting like him on a daily basis, but I will save that story for another day.  The way that Stone Cold Steve Austin disrespected authority is probably one reason why to this day I have never had long-term employment…that and the movie Office Space, but I digress.  From ’97 to ’02 I can say with confidence, that I never missed a Monday Night Raw.  From 9pm to 11pm every Monday night, there was no question where I was or what I was doing.  The video games at the time were great as well.  Nintendo 64 had Wrestlemania 2000 and No Mercy and those are games that my friends and I would play til four or five in the morning.  Those are games that my friends and I will still play some twenty years later.  I am curious to know if the fifteen to nineteen year olds today would be as interested in that era as I was?  I always thought as a youth, that I would change with the times.  Be the cool dad, always stay up to date with the new gaming systems, technology and music.  But I noticed that when I turned 35 that those things were passing me by.  My kids knew more about games than I did.  They knew what music was hip, and had to show me how to do things on my phone.  I am getting off subject again…sorry!  I don’t think teenagers today would find the attitude era as cool as I did.  When I was a teenager if the show got boring (which it rarely did) there was no phone to grab to check out social media.  We would have to sit it out.  There was no DVR to fast forward commercials, we had to sit it out.  For those reasons, I think I appreciated the product a little more.  You were seeing things back then for the first time.  Teenagers today have seen everything thanks to the internet.  And I just had an epiphany… maybe I have seen everything in wrestling because I have watched it for so long?  Especially, the WWF/E.  Maybe that’s why I prefer the attitude era opposed to the current era?  I know that I am not going to see now, what I saw then.  There is never going to be another Rock or Stone Cold.  There can’t be.  There is never going to be another faction like DX.  There is never going to be another Undertaker, or McMahon-Austin rivalry.  There will most likely never be another Monday Night War.  So, like many wrestling fans my age, the current era will never live up to the attitude era.  That’s not to say we shouldn’t appreciate the current era.

The current era, is not all that bad.  Just because I prefer my wrestling with a little more piss and vinegar so to speak, doesn’t mean that I am not enjoying todays WWE.  The athleticism of today’s wrestlers is far beyond what the attitude era had.  If you notice, you don’t see very many super heavyweights anymore.  There were 500 pound plus men in the ring during the attitude era, but not on today’s WWE product.  Guys like Seth Rollins, Dolph Ziggler, Finn Balor and AJ Styles are guys that I think could wrestle for days and not get tired.  You still have some very powerful guys like Cesaro and Sheamus, Big E, and Braun Strowman.

You still have factions as well, with the Shield and New Day.  There are some entertaining aspects to today’s product.  I have said that Smackdown Live has some of the best storylines I’ve seen since the attitude era.  And what about NXT?  Could that show get any better?  And isn’t it great how far the women of wrestling have come?  Now that I am an adult, I can appreciate the respect the WWE shows women.  In the attitude era, well… it was quite degrading the way women were treated in the WWE.  Now they are given equal opportunities, and I can say now that I would rather watch Becky Lynch and Charlotte go one on one in a cage, opposed to them fighting with pillows wearing only their underwear.  It just goes to show you how far not only wrestling, but society has come in the past twenty years.  Things that were on WWE programing during the attitude era, would not fly on today’s television.  Especially now that WWE is a publicly traded company with million dollar sponsors and a BILLION dollar network tv deal with Fox coming in 2019.

In closing, wrestling was great then, now and forever.  Just like the signature at the beginning of WWE shows.  WWE, like everyone else who is or has been successful has changed with times.  Although it is nice to go on the WWE network and check out those attitude era RAW and Smackdown’s, WWE is in a good place now.  I am glad I grew up watching wrestling when I did.  There wasn’t a better time to be a wrestling fan than in the late ’90s.  One could argue that now is the best time to be a wrestling fan as well.  Today’s WWE has something for everyone.  If you like womens wrestling, you got it!  If you like great storylines, check out Smackdown Live right now!  If you like rookies and up and comers who go out every night with nothing to lose, check out NXT.  If you want high-flying flips and death-defying leaps, check out 205 live!  If you want nostalgia, the WWE network has you covered.  The attitude era was great to watch live, and I don’t think any era before it, now or down the road will top it.  But just like they always say in wrestling…”Never say Never!”