Another Monday night RAW is in the books, and another “meh” from me.  It could be that I am a little spoiled being a product of the attitude era, but it feels like RAW is getting hard to sit through anymore.  This is coming from a Dolph Ziggler fan, and Ziggler is featured several times throughout the show.  There is nothing must see on Raw in my opinion.  I don’t care about the shield, and I don’t think anyone really thought Dean was going to turn on his brothers at the end of the show.  The show lacks creativity in my opinion.  WWE is relentless on getting Roman Reigns over as a face.  Why don’t they just turn the guy heel?  I’m sure he would love to give the fans a piece of his mind.  The hatred for Roman is that of Rocky Miavia before he transformed into The Rock.  Reigns needs a heel run!  The fans want to boo him, so let’s do it WWE!  I would love to see Roman do an angle where he turns on his Shield brothers.  I can see the Shield have a good run until the Survivor Series, then Roman can turn on the other two.  Possibly setting up a triple threat between them for the Universal title at Mania.  I would love to see something like that.  But, that’s for another day, so lets jump into to RAW.

Raw started of as predictable as ever.  I knew it would be either the Shield, or Dolph, Drew and Strowman starting off the show.  They did an ok job of trying to get us to believe that Ambrose may turn at the end of the night, but let’s be honest, it wasn’t going to happen.  They went back and forth verbally, hyping the 6-man tag for Australia.  I am having a hard time getting into this angle.  Honestly fast forwarding through most of the segment.  The Shield is a heel faction, that’s when they were at their best, and I personally am not invested in them as a face team.  So maybe, just maybe, the matches would catch my attention…but it didn’t start out that way.

The first match of the night was Finn Balor with Bayley vs Jinder Mahal with Sanil Singh and Alicia Fox.  The women were involved because they are the mixed matched challenge partners.  I am not a fan of Jinder Mahal, a great heel!  I just don’t buy into him as legitimate.  Even his WWE title run last year, was lackluster in my opinion.  But good for him for turning his career around!  Finn Balor should have won this match quick and clean.  But instead it went back and forth and he won by a school boy pin after a distraction.  Finn Balor is very underutilized.  They just don’t have anything for him.  I would like to see him go to Smackdown Live and challenge for the WWE title.

And back to the mixed matched challenge for a second.  Does anyone really watch it?  Did anyone watch it the first time?  Personally not a fan, but if it gets ratings then good for them.

The second match of the night was The Riot Squad vs The Bella Twins and Natalya.  The match was pretty good.  But a scary moment took place in the match when Brie Bella was performing the yes kicks on Liv Morgan, and accidentally kicked her in the face.

As you can see in the clip, Morgan was legitimately injured in the match.  You hate to see something like that, but it is part of the business.  I am not sure who, if either competitor is at fault.  I feel like Brie has struggled in her return to the ring.  She botched a suicide dive twice in one match a couple of weeks ago, and now the kicks…kicks… plural, to the face of Liv Morgan makes me wonder if she should have knocked a little more “rust” off before returning.  The match went on with Liv actually getting back in the ring to take a 6 woman suplex, but during the commercial break she was taken back stage for evaluation.  Hopefully there were no serious injuries and we see Liv back soon!  The match continued with Ruby Riot hitting her finisher on Natalya for the win.  The match was good, but was overshadowed by the botched yes kicks.

Yes, you read that right!  Konnor of the Ascension picked up a victory over Chad Gable last night.  The match was quick and honestly not that great.  I don’t like the current character of Chad Gable.  It comes off as childish and it’s a waste of not only his, but Bobby Roode’s time in my opinion.  Roode appears to be forced into this situation, and if I had to guess, I would say Gable is probably not enjoying it either.  If you recall when Jason Jordan went to RAW to be Kurt Angle’s son, Gable was being pushed on Smackdown as a legit singles competitor.  He was putting on great matches, even challenging for the US title.  Roode and Gable are the direct result of poor writing on RAW.  One could only hope that this team is short-lived and the end up wrestling each other.  I would rather see that opposed to them being a tag team.

Just how great is Triple H?  Not only is he one of the best wrestlers of all time, but as an executive he is killing it!  NXT!  Need I say more?  Triple H was just getting into a limousine last night and had a 30 second promo that buried the Undertaker.  Yes, pun intended.  If you haven’t seen it, do yourself a favor and check it out.  I think the guy is arguably one of the top 3 heels of all time!

Speaking of great heels, how about Dolph and Drew right now?  I know I am supposed to not like these guys, but as a long time Dolph Ziggler fan, it’s good to see him getting some love from the WWE.  Dolph and Drew put their RAW tag team titles on the line last night against The Revival, in a match that stole the show.  Great back and forth between the teams, before Dolph and Drew picked up a well-earned victory.  It was during this match that we heard “this is awesome” from the crowd for the first and the only time if I recall correctly.  I think we can all agree that at some point Dolph and Drew will split up with Drew going on to the Universal title picture.  But, until then I am enjoying seeing these guys tear it up.  And I don’t want to see them split too soon.  I think the longer they are together, the stronger Drew looks.  At the same time, I like traditional tag teams as champions.  The revival, A.O.P., B-Team, Breezango to name a few.  I am not a fan of two guys joining forces and taking over.  I like those teams that have a team name and “specialize” in tag team wrestling.  Smackdown does a great job of keeping the title’s on teams that are traditional tag teams, like the New Day, the Uso’s, The Bludgeon Brothers.  But none the less, a great match between Dolph, Drew and The revival. 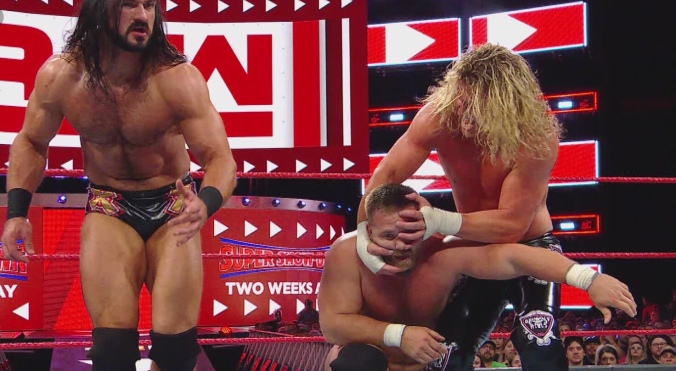 Lashley picks up a win in his hometown

For the first time since the night after Wrestlemania, Bobby Lashley received a huge ovation.  Granted it was from his hometown, but it’s good to hear since he was the biggest free agent to come straight to the WWE main roster since AJ Styles.  Lashley and Elias battled in an ok match that seemed to focus more on Kevin Owens and Lio Rush.  Lashley picked up the win by DQ, when Owens “inadvertently” ran into Lashley while chasing Rush around the ring.  I think the winner of the match was actually Elias.  This guy has main event written all over him.  He is great on the mic, looks great and awesome in the ring.  I would like to see him get more ring time and possibly go after the Intercontinental title.  I know Lio Rush is supposed to be the hype man for Lashley, but Elias was a better hype man for Owens.  Elias has gotten the better of Lio on the mic two weeks in a row now.  Elias could reach rock star popularity if the WWE were to ever turn him face.  But this is one time I say, don’t rush the turn. 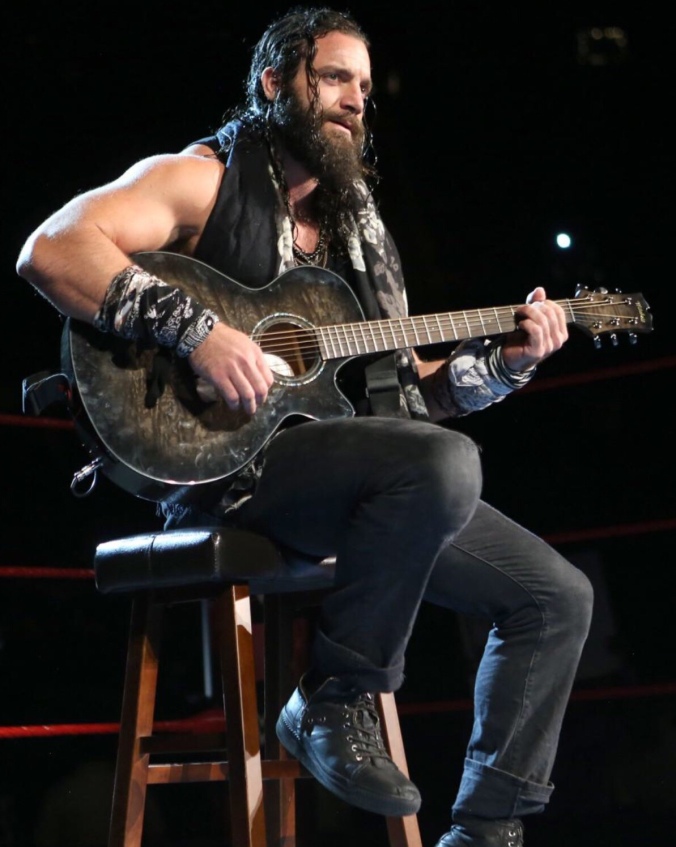 It was also mentioned last night that John Cena will return in two weeks to team with Bobby Lashley to face Elias and Kevin Owens in Australia.  We haven’t seen Cena since the Greatest Royal Rumble.  Rumor has it Cena is looking jacked.  I honestly can’t believe I am saying this, but I think RAW could use a John Cena boost right now.  So let me be the first to start a “We  Want Cena” chant!

You already know who won.  Not much to say about this match, it was quick and painless to watch. 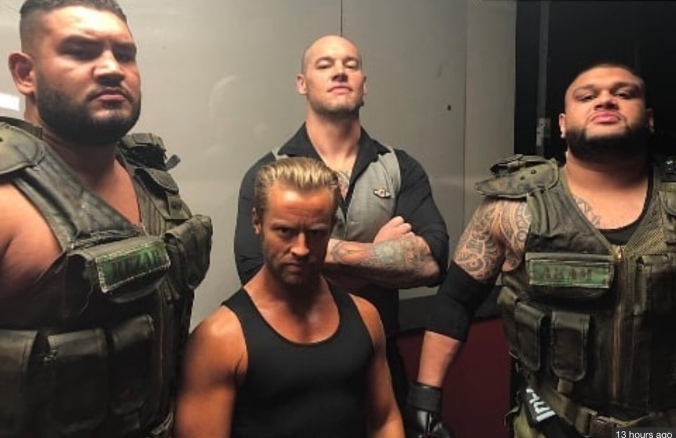 A.O.P. with Drake Maverick joined Baron Corbin in the main event last night to take on the Shield.  Dolph, Drew and Braun Strowman watched the match from the entrance ramp.  The match itself was ok, with the Shield picking up the win.  It is nice to see A.O.P. getting some love finally.  I was concerned they were headed for Ascension status when they first joined RAW. Adding Drake Maverick was a bit of a surprise.  I think Maverick looks strange next to those guys.  It’s a weird selection for manager.   I would have rather seen the WWE bring back a veteran big man to manage them.  Some one like Animal of the Legion of Doom/Road Warriors or Faarooq.  But Maverick is getting the job done.

The story of the match was, will Dean Ambrose turn on the Shield?  I think everyone knew it wasn’t going to happen, but that was the story that was pushed.  I mentioned before that if anyone of the Shield members turns, please… please let it be Reigns.  Dean Amborse looks great since returning.  He looks more muscular and his new hairstyle makes him look less high school badass and more Stone Cold badass.  I mentioned that I am not a fan of the Shield as a face team.  Either turn the entire team or turn Reigns.  I would be more interested at that point.

If I had to grade RAW I would say D+.  The highlights were the RAW tag title match and unfortunately the Brie and Liv Morgan botch.  When a botch is the thing you remember most from the show, that’s a problem.  I don’t know what it is about RAW lately, but I just can’t seem to get interested in it.  How do you feel about it?  Let me know.  I would also be interested to hear your thoughts on what would make RAW easier to watch.

Check out tomorrow as we review Smackdown Live, and as always thanks for reading gohomepwb.com