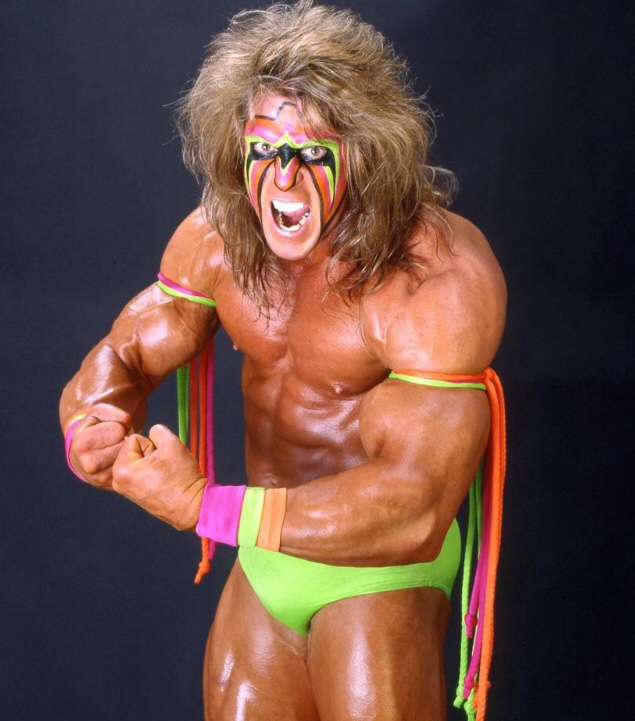 Week to week I have been listing my favorite wrestlers in chronological order.  First was Brian Pillman, then Lex Luger.  Next on the list is the incomparable Ultimate Warrior!  I was about eight or nine years old when I started watching WWF.  I had been watching WCW for the first four or five years of my wrestling fandom.  At about age nine I had been able to see the WWF product.  The wrestlers on WWF were almost like superheros, opposed to WCW’s “real life fighters” as I used to call them.  WCW wrestlers seem to always use their real name, where WWF wrestlers had names, like Ultimate Warrior, Hawk, Animal, Ax, Smash, Crush, Earthquake and Typhoon.  To me at that age, again probably nine years old, it was clear WWF was more geared towards children, with the characters they had.  The year would have been 1991, and on Friday nights after school my mom and stepdad would let my sister and I rent VHS movies at the video store.  Keep in mind we lived in an area where cable TV was not available, and my mom would not let us get satellite TV for several more years.  Instead of renting movies, I would always rent “wrestling tapes’ as I would call them.  That particular night, I found Wrestlemania 6.  Although at the time, it was probably closer to Wrestlemania 7, it was the first time I was watching Wrestlemania 6.  The main event was WWF World champion Hulk Hogan vs The Intercontinental champion Ultimate Warrior.  Hulk Hogan had been winning most, if not all the Wrestlemania main event matches for the first previous 5 years.  He seemed unbeatable, but the Ultimate Warrior was making a lot of waves, and a lot of fans were eager to see a new baby-faced world champion.  The match was pretty good for the time, and considering everyone thought at some point Hogan would “Hulk up” and he did, Ultimate Warrior was able to withstand the Hogan adrenaline rush, and get the win shortly after.  Hogan passed the torch so to speak, and Ultimate Warrior was off to the races.

Warrior was a strange character, and from most reports a strange guy.  A very misunderstood man, that would do and say things, that upset a lot of the higher-ups in the WWF at the time.  Warrior went on to hold the WWF title for the rest of the year in 1990, until the 1991 Royal Rumble when he lost it to Sgt. Slaughter.  Sgt. Slaughter went on to lose the title at Wrestlemania seven to, you guessed it… Hulk Hogan.  Warrior’s best time in WWF in my opinion was the build to Wrestlemania six against Hulk Hogan.  His entrance was like no one else’s.  The electric guitar and the sprinting to the ring, shaking the ropes and pumping his fist!  His entrance alone would get you fired up to see him wrestle.  Not to mention, is bright colors, face paint and unreal physique.  He literally was a super hero, to an eight/nine-year old kid.  I remember getting Ultimate Warrior shirts, figures, birthday cakes of his face paint, and my first wrestling buddy was the Ultimate Warrior.  For those who don’t know what a wrestling buddy is, it’s about a two foot tall pillow shaped like a wrestler, that you could play fight with.  I beat the stuffing out of those wrestling buddies!  I remember my Grandma bought me the Ultimate Warrior wrestling buddy for Christmas in 1991, and I can’t find it, but there is a picture of me holding it up much like a championship title I had one, with the biggest smile on my face.  I wanted anything that had to do with the Ultimate Warrior, and the WWF recognized that so did most kids my age at the time.  There was a lot to like about the Warrior, even today, you can play as him on the WWE’s 2K video game.  Which is the plan, as soon as I get it tomorrow!

The Ultimate Warrior had a good run during his first stint with the WWF.  He left for a while and returned to WWE in the mid 90’s, but it was a lackluster return to say the least. I watched the 2005 WWE produced documentary The Self-Destruction of the Ultimate Warrior, and it was clear the WWE did not have a great feeling about the Ultimate Warrior.  It was a documentary that had several current wrestlers at the time making fun of him.  I don’t know how much of it is true, but real life Warrior was none to pleased with the documentary.  He made it very clear, that there were a lot of lies in the documentary.  And I am surprised the WWE would produce something like that, that was so damaging to one of the greatest characters in WWE history.  There is no question, that during his heyday, Warrior had some interviews that were really confusing.  But I believe it added to his character.  He was a character like no one else, so why would he talk like everyone else?  Why would he act like everyone else?  Not acting like anyone else, is what everyone liked about him.  The release of the documentary was a low point for the WWE in my opinion.   A low-class move, that I think even the WWE would agree is regrettable.

WWE would make it up to the Ultimate Warrior nearly twenty years after he last wrestled for WWF, when they inducted him into the 2014 Hall of Fame.  It was an induction that was long overdue.  I can remember watching Linda McMahon induct the Warrior, and when he came out, I thought WOW!  The Ultimate Warrior is back in the WWE, for the first time in 18 years.  He looked great, his wife and kids appeared to be very proud of him, although they were not in his life during his wrestling days.  Warrior went on to give a great speech, even mentioning that he hated that WWF was called WWE, which every long time wrestling fan agreed with.  He also stated that he would like to see a spot in the Hall of Fame for guys and girls behind the scenes.  The people nobody knows about, but without them, WWE would not be the product it is.  He did mention the self-destruction DVD briefly, saying he didn’t appreciate it.  I felt the Ultimate Warrior handled it very professionally and had probably the most understandable speech of his career.  Ultimate Warrior was even invited to get in the ring the following Monday night on RAW.  The first time Warrior was in the ring in a WWE ring in 18 years!

That Monday night Raw speech, was a memorable one.  The first thing I noticed was his face looked really red, and he seemed to have a hard time shaking the ropes.  He was breathing heavy and sweating perfusely.  But he went on to give one of the most memorable speech’s in WWE history:

“No WWE superstar makes it on their own, every mans heart one day beats its final beat, his lungs breathe its final breath.  And if what that man did in his life, makes the blood pulse through the body of others, it makes them believe deeper in something larger than life.  Then his essence, his spirit, will be immortalized by the story tellers.  By the loyalty, by the memory of those who honor him and make the running the man did live forever.”

A great speech that is also chilling, as the very next day Warriors heart would beat its final beat.  Unfortunately, the Warrior passed away the next day of a heart attack.  Leaving behind a wife and two daughters.  I was glad he was able to get into the WWE Hall of Fame and make things right with the WWE, before his untimely death. Much like his speech, the memory of those who honor him, make the running the mad did live forever!  Long live the Ultimate Warrior, and thanks for being a childhood memory I will cherish forever!