Another Monday night RAW, and another predictable night in my opinion.  We did see a couple of returns and the dissention of the Strowman, Ziggler and McIntyre faction.  But aside from that, a throw away RAW in my opinion.

RAW started off with Strowman, Ziggler and McIntyre in the ring touting themselves and talking smack about The Shield.  The Shield finally came out minus Dean Ambrose, playing to the split of The Shield storyline.  The verbal confrontation was forgettable, and I am glad they are starting to conclude this rivalry.

The first match of the night was Drew McIntyre vs Seth Rollins with the winner receiving a World Cup tournament spot.  The match was great with some great moves including a superplex off the top rope that Seth Rollins then turns into a falcon arrow, however after the superplex, McIntyre was able to reverse the falcon arrow and hit it for himself.  Dolph Ziggler eventually interrupted the match to try to distract Rollins, but his attempt was stopped by Dean Ambrose.  Ambrose and Ziggler battled on the outside until McIntyre came to assist Ziggler, but Rollins was able to hit his Finisher the curb stomp on McIntyre and won via count out.  A great match, that had a finish that made both Rollins and McIntyre look strong.

Kane and Undertaker filmed a promo that was an answer to the DX are you ready? promo from the previous week.  I am intrigued by this match.  I am curious as to what we will get out of HBK, no one has seen him wrestle for over eight years.  I think we know what to expect from the other three in the match.  I personally believe that HBK will be the most athletic out of the four.

Tamina quietly made her return last night in a tag match that saw her and Dana Brooke take on Ember Moon and Nia Jax.  First and foremost, Nia’s entrance music suck.  I think they should change it and also turn her heel.  I thought she did much better as a heel.  But I digress.  Tamina and Nia had the crowd ooing and ahhing when they entered the ring.  Both are very strong women and at one point Tamina was able to lift Nia on her shoulders and hit the Samoa drop.  The match was actually really good and ended when Ember hit her flying stone cold stunner on Dana Brooke  for the win.  After the match, the ladies started throwing each other over the top rope promoting the women’s battle royal at evolution.  At first, I was sceptical of an all womens PPV, but the closer we get and the more they build the storylines, I can actually say I am looking forward to it.

Rhonda Rousey the most dangerous woman on the mic

Rhonda Rousey came out last night wanting some explanation from the Bella’s as to why the betrayed her last week.  When the Bella’s came out, they played the typical heel and said Rousey is a entitled rookie.  However, Rousey had a few things to say herself.  Rousey had some great lines last night the totally buried the Bella’s.  Rousey called them leaches and compared them to small pox.  Clearly her lines were scripted, but the one comment about the only door Nikki Bella knocked down was to John Cena’s bedroom, sent the WWE universe into a frenzy.  Scripted or not, Rousey still had to deliver the lines and make it feel real, and she did just that.  The rivalry is now personal and this match at Evolution is shaping up to be great one.  I still think now is the time for Rousey to drop the title.  And I am going to go on record and call it now.  WWE needs a top heel woman superstar, and The Bella’s fit that mold.  Take the title off of Rousey, will definitely solidify The Bella’s as the most hated women in WWE.  As for Rousey, kudos for your mic work last night.

Ziggler in the World Cup 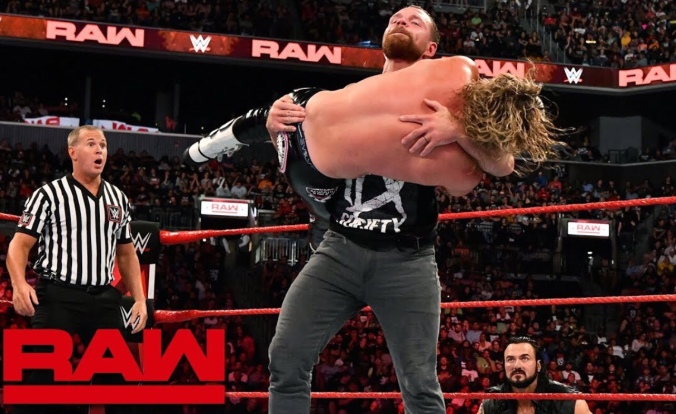 Dolph Ziggler vs Dean Ambrose for the last RAW spot of the World Cup tournament.  I have honestly seen better matches out of these two, I personally don’t think they work well together.  They don’t seem to have good chemistry in the ring, and that dates back to their WWE title match as Summerslam a couple of years ago.  I also felt the match was predictable, because I figured who ever won between Rollins and McIntyre, their partner would lose in the Ziggler and Ambrose match.  Called it!  I actually called the McIntyre Rollins match as well.  If you notice every participant in the World Cup tournament is a former WWE World heavyweight champion.  McIntyre has not won the WWE title…yet.  So I pretty much knew that Rollins would win and when I seen he won I would have bet my inheritance on Ziggler winning his match.  WWE fifty-fifty booking 101.  Nonetheless, I love that Ziggler and Rollins are in the tournament.  They are arguably the hardest working wrestlers on the main roster right now.  I wouldn’t bank on Ziggler winning the tournament, but I would bank on him having the match of the night at Crown Jewel.

Where is Crown Jewel taking place?

Through out the entire RAW show Crown Jewel was promoted, but it’s location was not.  Crown Jewel was and as of this writing still is scheduled to take place on November 2, 2018 in Saudi Arabi.  However with the recent tragic killing of a journalist, this has become a very political issue.  Alot of sponsors have already been pulled and a lot of pressure is being put on the WWE to post pone or cancel the event.  WWE’s motto has always been the show must go on, but this could be an exeption.  As public as WWE has become, I don’t think they will want any negative publicity after decades of working to change their image.  Also, I can image the superstars would probably rather stay in the states, considering just last week they were in Australia.  Not to mention, it’s probably going to be a little nerve-racking going there knowing all the controversy surrounding the tragic killing.  One thing is for sure, what ever WWE decides to do, it will be best for business.

For the twenty-seventh week in a row, Finn Balor with Bayley in his corner took on Jinder Mahal with BOTH Singh brothers and Alicia Fox in his corner.  The match was quick and predictable as Balor won with ease.  My how far has Mahal fallen.  A year ago at this time he was WWE champion, now he is back to being enhancement talent.  Samir Singh made his return last night joining Sunil and Alicia in Mahal’s corner.  Maybe with the entire “band” back together, Mahal can start picking up some wins.  He is a good heel, but the need to make him relevant again for his heel tactics to be taken seriously.

After the match Bobby Lashley came out and interrupted Balors victory celebration.  It looks like that may start a new rivalry for the two, and it should be a good one.  Balor is one of the best in ring performers in the world, and Lashley as a heel is money.  I hope this develops into a feud.

The Bobby Lashley we’ve all been wanting

Lashley went one on one with Tyler Breeze last night in another squash match.  Breeze was able to get a flurry of offense in, but it was not nearly enough to derail the train that is Bobby Lashley.  Lio Rush was in his corner shouting into the mic throughout the match, adding to the heel character that is Bobby Lashley.

Trish and Lita do not want to talk about practice

Trish Stratus and Lita are to team up and take on Mickie James and Alexa Bliss at evolution.  Trish and Lita were in Philadelphia last night to promote the match when Alexa and Mickie interrupted.  Honestly it was a forgettable segment, except for when Trish and Lita used the Allen Iverson practice quotes during there promo.  It received a little bit of a reaction, but probably not what they had hoped.  I think their match at Evolution will be a good one, despite the lame verbal back and forth we saw last night.

A swerve by Kurt Angle

Per acting RAW general manager Baron Corbin, Kurt Angle was to have a handicapped match against the AOP.  Angle is on “vacation” and didn’t bring his ring gear.  So Corbin said “I’m sure you could find something to where.”  When the match started Angle was dressed as the Conquistador again.  But you could clearly tell it was not Angle under the suit.  AOP made short work of “Angle” and Drake Maverick told the AOP to unmask him.  When they did they found that it was not Angle that they were wrestling.  Angle outsmarted the GM and when Corbin came out to address it, he was angle slammed for his troubles. 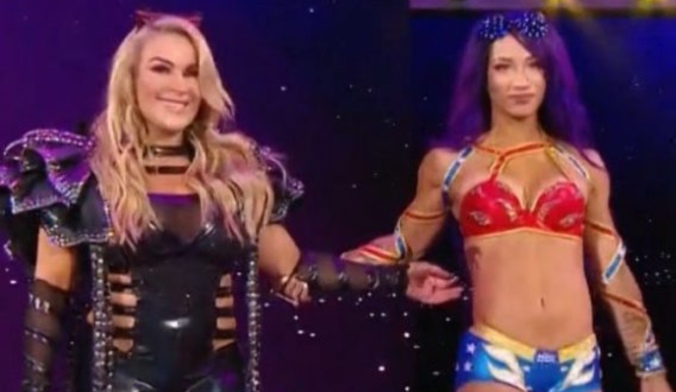 And yet another return last night, we saw Sasha Banks come to be at ringside along with Natalya.  Natayla took on Ruby Riott of the Riott Squad.  The match was quick with Natalya picking up the win via disqualification.  After the match a very predictable fight breaks out, but Natalya, Bayley and Sasha got the better of The Riott Squad on this night.

Elias was on his guitar making fun of the Philadelphia crowd last night when he was interrupted by Apollo Crews.  Apollo actually got the better of Elias making me wonder if this is going to be a potential feud.  Titus O’Neal must have had the night off, because we didn’t see him.  I think it would be best for Apollo to drop Titus and go on his own now.

Is the feud over yet?

Just like we seen with Balor and Jinder Mahal, The Shield vs Braun Strowman, Dolph Ziggler and Drew McIntyre was the main event for the twenty-seventh straight week. Of course we saw seeds planted of a break up between Ambrose and Rollins.  Ambrose and Rollins were not on the same page, and at one point Ambrose tried to apply the dirty deeds finisher to Rollins.  But they were able to overcome their differences and with the help of Roman Reigns, put Dolph Ziggler in a triple powerbomb for the win. Over all a pretty good match, that was less interesting than what took place after the match.  After the match Strowman picked up an already injured Dolph Ziggler and put him in the running body slam.  Once Strowman got to his feet after applying the move to Ziggler, McIntyre ran in and hit Strowman with the Clayborne kick ending the show.

All in all an ok show.  It will be interesting to see if Strowman will return to be a face or stay heel.  I look for him to be a babyface again, because he is someone that the people want to cheer.

Check out gohomepwb.com tomorrow for my Smackdown Live 1000 review.