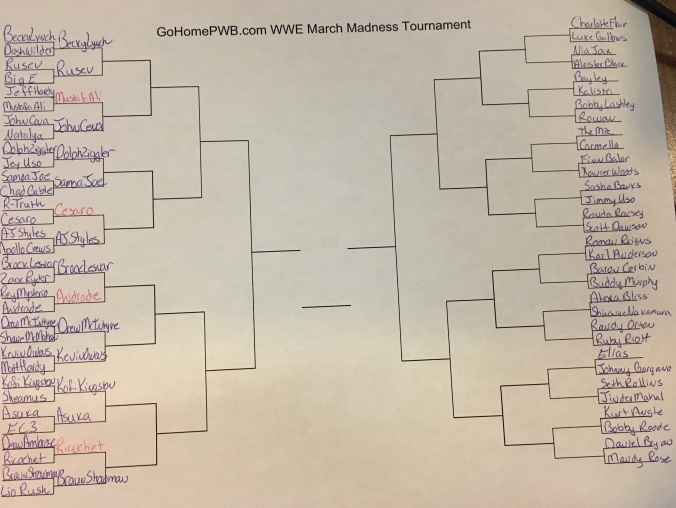 The first round continues in the GoHomePWB.com WWE March Madness tournament.  A great line up of matches on the top right bracket, with the potential for a few upsets.  So far, only four lower seeds have advanced, that being; twelve seed Mustafa Ali, ten seed Cesaro, nine seed Andrade and ten seed Ricochet.  Let’s take a look at today’s match ups.

The best womens wrestler on the WWE roster in my opinion is Charlotte Flair.  She is a clear-cut number one seed and her first round match up is against ‘good brother’ Luke Gallows.  Gallows has been underutilized since returning to WWE and would be no match for ‘The Queen’ Charlotte Flair.

A great first round match up, between Nia Jax and Aleister Black.  WWE has hinted around at having Nia involved in some inter gender match ups.  But if this match were to happen right now, no way Aleister Black looses.  I feel like the WWE is very high on this guy and he won’t be losing anytime soon.

I think Bayley vs Kalisto would be a really good match.  I think their respective styles would complement each other and it would be a fun match for fans.  Based on each wrestlers current WWE status, I think Bayley wins this one.  She has been on a roll since the beginning of 2019, and Kalisto just isn’t getting the exposure that Bayley does.

A battle of two big dudes.  That’s the only way I can describe it. (sorry for being so simple)  I like Rowan paired up with Daniel Bryan, but his current role is more of an insurance policy for Bryan.  Wins and losses do not mean much to a guy like Rowan.  That’s why I like current intercontinental champion Bobby Lashley to win this one.

The Miz vs Carmella

Both superstars are fairly new to the baby face realm in professional wrestling.  Both are very entertaining and probably better in talking segments than wrestling matches.  However, I think The Miz is on the verge of mega popularity.  I think the WWE universe is finally giving him the respect he needs to start winning a lot of matches.  The Miz wins this one.

This is another match up that I would love to see.  I like both guys and both have chips on their shoulders.  I think it would be a lengthy back and forth match up, with a clean finish and probably a hand shake after the match.  The winner… Finn Balor after hitting his finisher.

Another interesting match up between Sasha and Jimmy Uso.  Sasha has come off a little weak to me since losing to Rousey at the Royal Rumble and The Uso’s have been nearly unstoppable both in the ring and on the mic.  Sasha is a higher seed here, but I like Jimmy Uso for the ‘upset’ win.

I have just realized that this is a female heavy bracket, but there are a lot of deserving female wrestlers.  In this match I like Ronda Rousey in a quick contest.  Scott Dawson has somewhat of an old school ‘men are better than women’ character, and may put up a fight, but heel Ronda Rousey has even the toughest guys afraid of her.

The top right bracket is now complete and the finish of the first round will be published on Friday.  A week from today will start the second round of the tournament and the match ups are getting harder to pick.  Also be sure to check out Wednesday’s weekly top ten and as always thanks for checking out GoHomePWB.com, the people’s wrestling blog!