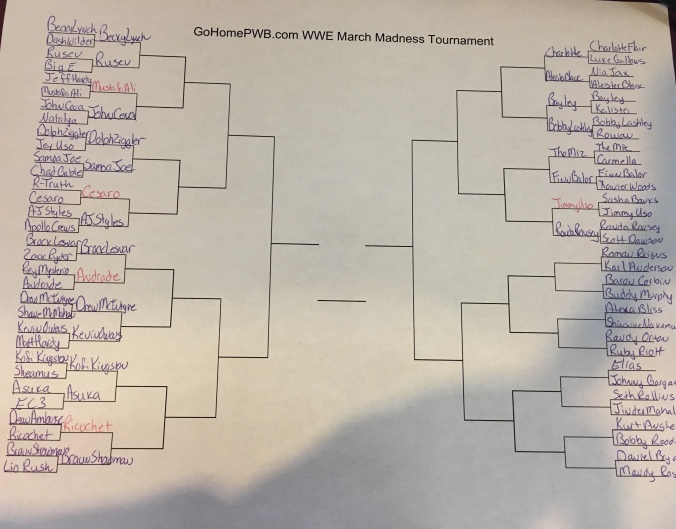 The madness continues as I finish the first round of my WWE March Madness tournament.  Today I will discuss the bottom left bracket which is headlined by number one seed Roman Reigns.  Let’s jump right into the match ups and complete the first round.

Much like all the other number one seeds versus number sixteen seeds, no surprises here.  Karl Anderson might get a punch or two in and maybe a move, but no way he defeats Roman Reigns.  Reigns wins easily after a superman punch and spear.

I feel this would be a pretty good match, with the WWE universe firmly behind Buddy Murphy.  Baron Corbin is hands down the most hated wrestler in the WWE right now.  Corbin has been able to find ways to win in recent months and after what would be a great match, Corbin would find a way to win.

Although we see Alexa Bliss in more of a talk show host role these days, I still think she is in a better situation than her opponent in this match up.  Shinsuke Nakamura had a great start to 2018, but then the wheels fell off.  He was unable to defeat AJ Styles for the WWE title and had a lackluster run as United States champion.  For that reason I like Alexa Bliss.

Randy Orton is not someone to mess with.  I wouldn’t put it past him to legitimately take on Ruby Riott.  Ruby has been reduced to enhancement talent in recent months and Randy Orton has been on a role.  I think this one is a no brainer, Orton wins after an RKO.

Elias landed the gig of official music act of WrestleMania while Johnny Gargano will be challenging for the vacant NXT championship at TakeOver.  This is a tough one to pick, but I think it would come down to the referee being ‘accidentally’ knocked down.  Elias would then grab his guitar and blast Gargano with it just before the referee was able to crawl over and count the one…two…three.

Not even close, Seth Rollins wins easily after a falcon arrow.

I actually wouldn’t mind seeing this match.  Kurt Angle is currently on his farewell tour and has not lost a match in several weeks.  Bobby Roode is struggling on the main roster, to say the least.  I like Angle to win this one after an Angle slam.

If it weren’t Daniel Bryan, I would probably take Mandy Rose in an upset.  Mandy has been getting quite the push in recent months and would be a likely pick for an upset.  But not against the current WWE champion Daniel Bryan.  He is doing great as a heel and will be hard to stop in this March Madness tournament.

That completes the first round of the tournament.  We will be jumping right back into the tournament on Sunday with the first eight of the sweet sixteen being determined.  Also with next week being WrestleMania week, I will have posts everyday next week.  These blog’s will be the completion of the March Madness tournament, the GoHomePWB.com weekly top ten, NXT TakeOver predictions and reviews, WrestleMania predictions and reviews and a little thing my family likes to call KessellMania.

I am looking forward to WrestleMania week and I hope you are as well.  As always thanks for checking out GoHomePWB.com, the people’s wrestling blog!