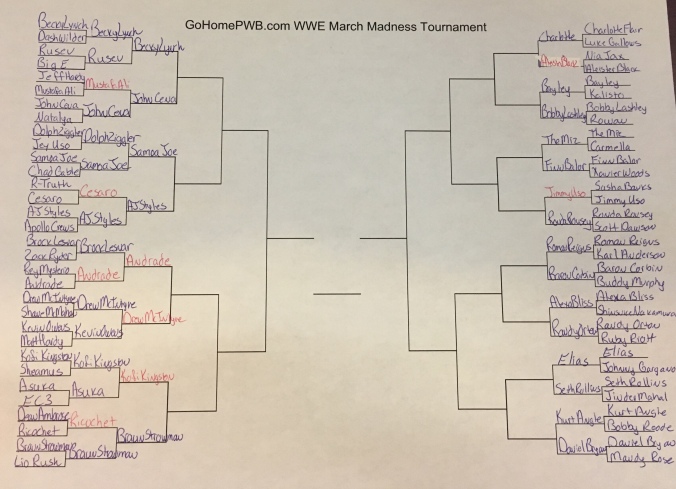 Moving on in the GoHomePWB.com WWE March madness tournament, today we complete the sweet sixteen.  The first eight into the sweet sixteen are a who’s who of WWE today.  Yesterday, the biggest upset was Andrade over Brock Lesnar.  Let’s take a look at today’s match ups and see if we are in for another surprise or two.

This is a tough one, because I really, really like the direction that Aleister Black is headed.  But he has a tough task of taking on the eight time women’s champion Charlotte Flair.  Charlotte is THE woman in the women’s division and I think she finds a way to win and move on.

This is a another tough pick, because Bayley has been on quite the roll recently, and even though Bobby Lashley is the intercontinental champion, he is wishy-washy with his wins and losses.  In this one I think Lio Rush gets involved and helps Lashley find a way to win and move on into the sweet sixteen.

The Miz vs Finn Balor

Ok, so these are getting really difficult to pick.  At this point it’s coming down to a coin flip.  I think this is a very even match up, considering the momentum The Miz is building as a baby face.  Finn Balor, as much as I hate to say it, has become a little stale in my opinion.  But if it comes down to a clean wrestling match, I have to go with Finn Balor.

Ronda Rousey is basically untouchable right now as a heel, and I think she wins this match.  But not before Jimmy Uso obliterates her verbally.  I think Uso, would put up a good fight, and now way he taps to Rousey, but I think Rousey wins by count out.

Roman Reigns no longer hears the boo’s he was once getting, but Baron Corbin certainly hears them.  Corbin is probably the most hated wrestler in the WWE, and I think if these two meet, the fans would enjoy the outcome.  I like Reigns in this on to win via superman punch and spear.

Another match up that pits Randy Orton against a woman.  I really like Alexa Bliss, especially since she is from Columbus!  But if I am being honest, Orton is ruthless and I wouldn’t put it past him to hit Alexa with an RKO and move on to the sweet sixteen.  Setting up what will be a great match up between him and Roman Reigns.

I don’t think there is any question who wins this one.  Unlike his first round opponent, Jinder Mahal, Elias will give Seth Rollins a little bit more of a fight.  But in the end, there are not enough guitar’s for Elias to use to beat Rollins and after a curb stomp, Rollins moves on to the sweet sixteen.

The last match in the second round pits WWE hall of famer Kurt Angle against current WWE champion Daniel Bryan.  I would love to see this match up, and all its technical beauty.  In the end, I think age will be the downfall of Kurt Angle.  Ten years ago, I would have said Kurt Angle wins, without question.  However, today Daniel Bryan wins, but not clean.