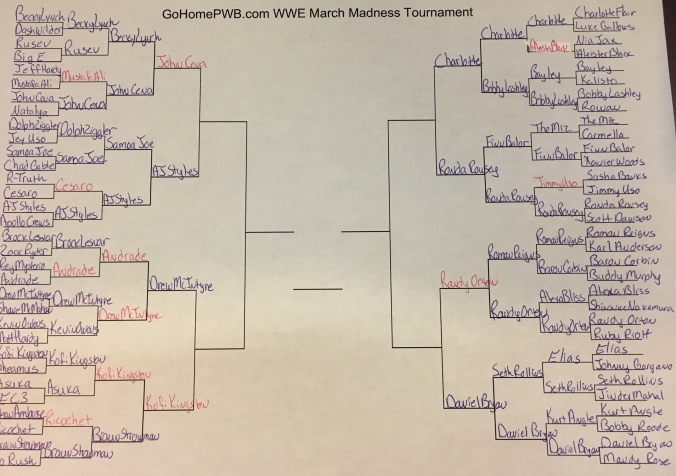 We are here, just one day away from what is going to be an amazing weekend for professional wrestling fans.  I want to thank everyone for following the tournament and having fun with it like I did.  Today I will complete the bracket and crown the first ever GoHomePWB.com WWE March Madness Champion.  But before I can crown a champion, I have to get a final four.  So…. LET’S GET READY TO RUMBLEEEEEEE!  Sorry, that was super cliché.  Anyway, let’s do it!

John Cena was able to knock off Natalya, Mustafa Ali and the super popular Becky Lynch to get to the elite eight.  One more win keeps him from the final four and his opponent is former rival AJ Styles.  Styles has had a good run and a tough road to this point.  Apollo Crews, Cesaro and Samoa Joe all fell to AJ Styles on his road to the final four.  Unfortunately for Styles, due to the tougher route to this point Cena is able to defeat him and be the first wrestler to make it to the final four.

An incredible run for both men and now a one on one match up for a final four spot.  Drew McIntyre has been unstoppable lately, but Kofi Kingston has been unreal.  In the past month Kofi has had two matches that put him in the ring for over sixty minutes.  He refuses to quit, and I think in this match up, Kofi once again, finds a way to win and move on to the final four.

This match guarantees a woman in the final four.  What a run for both women and although, we have seen this match before, I would love to see a one on one between them once again.  The last time they met, Ronda Rousey was a baby face and I guess Charlotte was as well.  Since then, both women have changed their character dramatically.  If it was a legit one on one ‘wrestling’ match I have to give the edge to Charlotte.  If it were a legit one on one fight, Rousey hands down.  But the eight time women’s champion gets the nod for me and is the first woman in the final four.

I am sure we have seen this match before, but I think these two could put on an instant classic.  Randy Orton has had a slightly easier road to this point than Daniel Bryan.  Bryan has needed help from Rowan to move on past Seth Rollins.  I think if Rowan were to get involved Orton would hit him with an RKO, and then hit one on Bryan for the win and complete the final four.

We are down to four.  John Cena vs Kofi Kingston and Charlotte Flair vs Randy Orton.  A little bit of a surprising final four, but I think it stays true to both college basketball’s NCAA tournament and the WWE.  Kofi being the lower seed underdog, Cena being the ‘Duke’ of the WWE, Charlotte and Orton are the ‘Kentucky and Michigan State’.  Three of the four you would anticipate making it, but there’s that low seed wild card that every casual fan whose bracket is busted is rooting for.  Two match ups to determine a championship match.  Lets get to it!

As mentioned, John Cena is the one constant that you would expect to make a deep run in a tournament, and Kofi is that underdog that everyone is rooting for.  I think in this match up the fans have respect for Cena, but are really behind Kofi.  I think Cena would jump out to an early ‘lead’ but Kofi would defend and hang in there for as long as he could.  Just when it looks like Cena is going to put Kofi away, Kofi goes on a run and makes it an even match again.  In the closing minutes, Kofi would hit a ‘desperation three’ sending the match to ‘over time’.  The never say die attitude of Kofi, and the never give up mantra of Cena, make this a crowd pleaser.  With a surprise maneuver, Kofi hits Cena with one last trouble in paradise finisher and picks up the one, two, three.  Kofi is in the finals.

The second match in the final four is going to be hard to follow.  Two heavyweights from different divisions are meeting in this one and a lot of offense is expected.  A long match up that sees a lot of back and forth and ‘lead changes’ but when we get late in the second half, Randy Orton starts to pull away and never look back.  Orton wins this one, ending the great run Charlotte Flair had in this tournament.  Randy Orton will now meet Kofi Kingston in the Championship match.

Finally, after nearly two weeks of going over fantasy matches, there is one left to pick.  Low seed and underdog Kofi Kingston will go one on one with Randy Orton for the first ever GoHomePWB.com WWE March Madness championship.  Both men had a tough road to get here, with Kofi’s being a little bit rougher.

Kofi had to defeat the likes of Sheamus, Asuka, Braun Strowman, Drew McIntyre and John Cena to get to the championship, an unbelieveable run.  Orton on the other hand didn’t have much trouble until his last three matches.  He had to eliminate Ruby Riott, Alexa Bliss, Roman Reigns, Daniel Bryan and Charlotte to get here.

At this point Kofi and Orton have to be exhausted, especially Kofi after his double overtime win against Cena.  Orton cruised through his first couple of matches and I think that plays a role in this one.  Kofi, although clearly the fan favorite, has nothing left.  He puts up a good fight, but I think Orton hits a couple early RKO’s and Kofi just can’t catch up.  Orton hits one final RKO with under a minute left and it proves to be the end of a spectacular run by Kofi Kingston.  It’s Randy Orton who is ‘cutting down the nets!’ 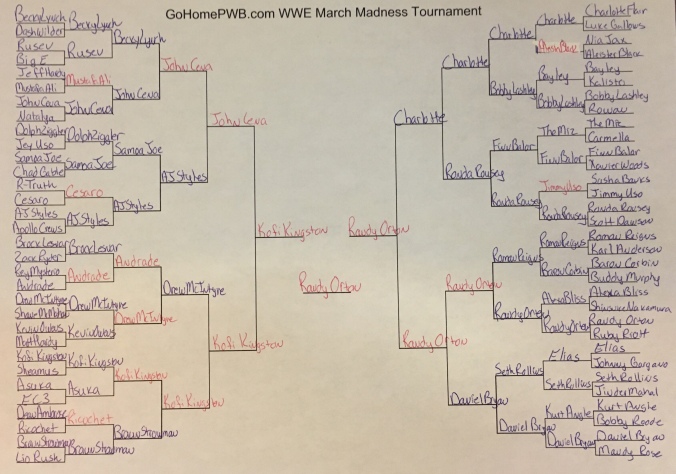 I want to say thank you for following the tournament.  It was something new and fun that I wanted to try.  I love the NCAA championship tournament and I found away to incorporate wrestling into it.  A lot of fun for me and I hope you enjoyed the ride as well.  I plan on doing it again next year!

Tomorrow, I release my NXT TakeOver and WrestleMania predictions.  Last months Fastlane pay per view was my first perfect prediction.  I highly doubt I bat a thousand again, and honestly I hope not.  I think we are in for some surprises, I will try to call them, but I think we may get a couple shockers.

Thanks for checking out GoHomePWB.com, the people’s wrestling blog!